We have already suggested ways of entertaining your footie mad kids indoors and out, so to add to that, here are some football games past and present

This simple game dates back to the 1950’s and is still as popular today. It can be played by children as young as 4, up to adults. Although there are some great, inexpensive sets to buy, you can make one up of household items:

The ball- If you’re playing on a carpet, a light plastic ball, a dried pea or even a table tennis ball will do.

A large drinking straw for each player.

Mark out a pitch with objects. Place the ball in the middle of the pitch and start the match. The players blow the ball until it goes into one of the goals. The first player to reach 5 wins. The only rule is you are NOT allowed to touch the ball, with the straw or hand. If you do, the opponent is awarded a penalty.

Without doubt this is possibly the most popular football game that transcends over the decades. I played it as a child and so have my sons and grandson.

It’s become so popular over the years that they have tournaments held all over the World, replicating Champions League and World Cup. This finger flicking feast of football continues to stay strong, even amongst the world of online gamers.

This is a game usually played in bars, pool halls and holiday camps. It comprises of a table pierced with rods that have players attached. The aim of the game is to move the ball into the opponent’s goal by manipulating the rods, which in turn flip the players. Although rules often vary when the game is played casually, at competitive level table football is played according to a set of rules::

Let’s have a look at the online and console games around.

This is the perfect game for those parents who despair at their children spending hours online. This football game (used to be called Championship Manager) is a great mix of using brain power creating a team and bringing it up through the ranks, selling & buying players, training players and everything that involves managing a team. It requires reading, maths and logic skills and it’s a game that can actually stimulate a brain over several days- hard to believe but true!!

The ultimate football console game . Love it or hate it, it’s here to stay.

Again a console game that doesn’t seem to be disappearing anytime soon.

Here is a list of the Top 10 Ranked Football Games from the guys at android authority:

There are myriad of football related activities and games you can play indoors and outdoors with children, but don’t forget the wealth of content you have at your fingertips too. Look at old videos of matches & tournaments played with your Sunday League teams. Go through matchday programmes and relive great games you’ve seen, and catch up with the tons of re-runs of World Cups, European Championships, Champions League and domestic League games that are being shown on TV. 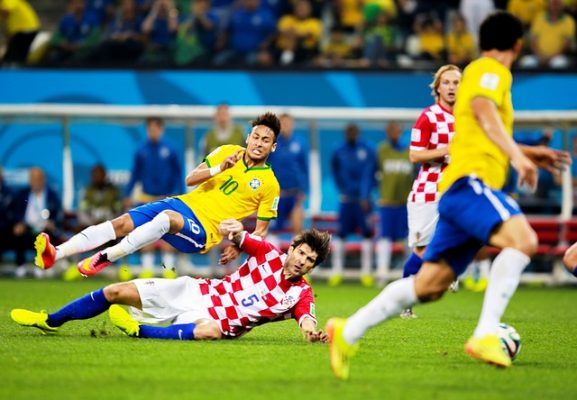 Nobody knows when we will kick off again, so until then, let’s keep everything football, and have fun…

Image by Ali Asad from Pixabay

Image by Pexels from Pixabay

Are you enjoying this site and the great images available to you? To keep things fresh and new, it costs quite a bit! So we’d like to reach out and ask for help. Can you afford £1 or £2 / month (the price of a chocolate bar) to help Saronti update the site regularly with unique & lovely images & ideas?