Our Young Author’s Gallery is a place of pride at Saronti, and with new additions every month we thought we would celebrate by listing 10 Famous Young Authors. If you’ve ever tried writing a book you may know that you start out full of energy, plots, twists, character analysis, tragedy hope and resurrection. For many writers though, this initial phase of euphoria is swiftly followed by months and months of hard slog! So when we receive a brilliantly original story, embellished with superb drawings and artwork, that’s been completed by a 5 year old- yes 5 year old- we are quite simply blown away.

So as we can see age really is just a number when it comes to writing books. Here at Saronti we are soon to be opening up our services to more publishing packages, giving more children ( and eventually adults) the opportunity to see their works in print and on platforms for sale. We know there are many talented, creative and ambitious young authors out there and whether the book is for friends & family or for the wider stage, why not let us help you. 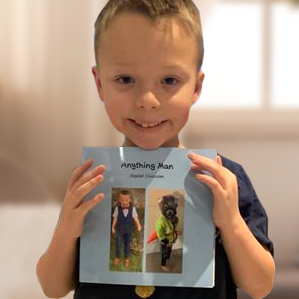 If you have, or know of, a Young Author who would love to see their work in print, get in touch with us and let us show you how we can make that dream come true.

Don’t take our word for it- here’s how one very happy parent told us:

When someone asks what did you do over the summer, her answer is “I wrote and got my book published”. She’s taken it into school and been asked to read a chapter everyday in front of the class. I know she’s got in her to one day take centre stage amongst thousands.
I usually have a lot more to say but right now this is about shining the light

on my mini tornado.
A few thank you’s to Karine Large and Sandie W. at Saronti who did phenomenal work in the publishing.
This is just the beginning there’s much more to come from this mini tornado

that is for sure!