Baby name books are one of the most popular gifts for parents-to-be, but how much use are they really ?

My own children are named after my favourite author, the Japanese word for Sun and a mish mash of a name I liked at the time, but had been exhausted by Celebrity baby namings. Add youngest son’s (at the time) Tomb Raider obsession, the husband put the two together and Hey Presto! Luckily she suited the name too- which all Mum’s know is a very important factor.

Celebrities name their children in a rather unique manner- (who can forget Brooklyn, Apple and North??) but it seems that the trend for naming babies after relatives, mainly grandparents, isn’t going away, and the traditional route of ‘passing down the name’ is still very much alive and kicking. 80% of babies are given one of the Grandparents names as a middle name, but does this put pressure on that child to then carry on the tradition. 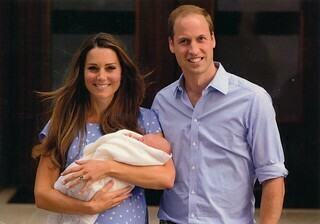 The Top ten of baby names for boys is currently headed by George, which shows that Royalty has a huge influence on the British population, and if the polls are to be believed, Charlotte is the favourite for baby girls. It leads me to wonder, just how much freedom the Royal couple have in naming their children. I mean you just can’t see Princess Katniss, now can you!

Popular names seem to be influenced by all kinds of events. Past predictions have seen an increase in :-

For the girls the same route seems to be prevalent:-

Choosing a middle name can sometimes be more difficult than the main name. Without any history or family traditions to follow, it comes down to personal choice. Quite often, it comes down to pronunciation of the full name, and this leaves the following names doomed, forever to be ‘stuck in the middle:’

So however you decide to name your child, it helps if you put yourself in their shoes, and imagine how they will feel having their name shouted out every morning and afternoon in registration!

There is also help at hand, if you really can’t decide- a baby name generator may be able to throw out a few suggestions, based on your likes and dislikes.