Card games have been around since the last century and it doesn’t look like they’ll be dying out any time soon. With a whole range of different card games to choose from we are going to look at Snap- and why it’s still everyone’s favourite family card game. Also known as Slaps, Egyptian Ratscrew, Schnipp-Schnapp,Spitz, Beggar-My-Neighbour and Slapstick, this game was at the heart of children’s enjoyment during the late Victorian era. It’s a game that can be played with standard 52 card pack, or character cards. It’s also played from toddler, right up to octogenarian plus and is a sure fire guarantee to make everyone giggle.

Deal the pack out among the players in face-down stacks as equally as possible. Players take it in turns to remove a card from the top of their stack and place it face-up in the middle of the table, creating a pile of cards. When two cards of the same character or number are played, players must shout “SNAP”. The first person to shout, wins all the cards in the pile.

The winner is the person who ultimately wins all the cards. 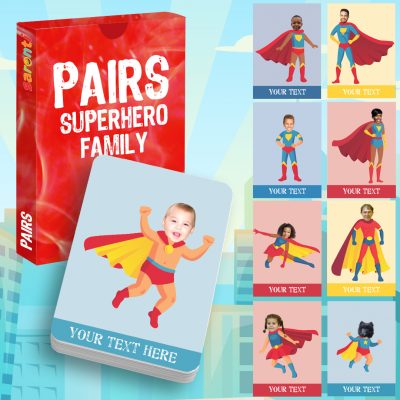 This game is a real favourite at family games night but it’s also one of the first card games to be taught to young children. With a set of cards featuring characters, rather than numbers, young children can more easily identify the matching cards, and therefore have a chance of winning. Personalising these characters with faces and names of family & friend’s faces makes the game a laugh a minute.

To make the game a little harder for older children, penalties can be imposed for falsely calling out “SNAP”, which as everyone knows is practically impossible!

However you play it though, Snap is guaranteed to make everyone giggle.